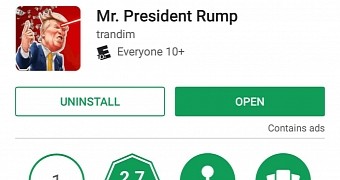 A total of 85 Android apps were removed from the Google Play Store after it was discovered they were compromised with malware capable of stealing social network passwords from users’ devices.

Ironically, the compromised apps were discovered by Kaspersky, whose software was recently banned in the United States over alleged ties with Kremlin, and the malware was targeting users of Russian-based social network VK.

The more worrying side of the story is that the apps have been available for download for a long time, and one of them recorded more than 1 million downloads on the Google Play Store.

Called “Mr President Rump,” this app was a game that was published in March this year and its download count skyrocketed in the summer. Other apps have been in the Store for nearly two years, with their installations ranging between … (read more)
Source link