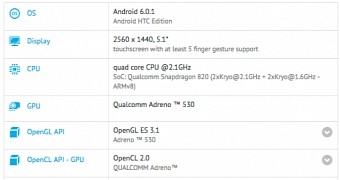 HTC and Google have partnered for releasing two upcoming Nexus smartphones this year, but it seems that HTC is also working on some devices of its own. The HTC Desire 10 Pro and HTC Desire 10 Lifestyle are expected to be announced in the next few weeks.

HTC Desire 10 Pro seems to have just passed through GFXBench (via Phone Arena) and some specs of the upcoming device have been revealed. It seems that the smartphone will be coming with a 5.1-inch display with 1440 x 2560 pixel resolution.

It will also run Snapdragon 820 SoC and a quad-core CPU, coupled with Adreno 530 graphics processing unit. RAM capacity seems to reach 4GB with 32GB of internal storage. In addition, the smartphone will come with a 12MP camera in the back and 5MP camera in the front. Aside from this, the HTC Desire 10 Pro will come with Android 6.0.1 Marshmallow out of the box and possibly HTC’s Sense … (read more)
Source link