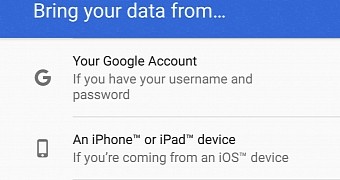 Google recently started rolling out the stable version of Android 7.0 Nougat and users have been finding all sort of neat features inside this new version of Android OS. The latest shows that Google may have offered users the option to migrate from iOS to Android in an easy way.

A user from Reddit performed a factory reset on his Nexus 6P and found out that Google may have provide the option to migrate from iOS to Android. The screen showed that the user needs to open their iPhone or iPad device, open Safari, go to android.com/switch and then follow instructions on the site.

The feature isn’t exactly new on an Android device, considering that HTC and Samsung have been offering it for some time now. Still, it’s refreshing to see it on a Nexus smartphone.