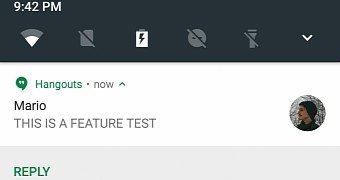 Google released the stable version of its latest operating system not long ago and rumors on the upcoming version have already surfaced. The latest information shows that Android 7.0 Nougat could receive quick reply from the lock screen.

XDA developers reported that such a feature could be coming soon. One of the most exciting features in Android Nougat is Quick Reply, a tool that allows users to reply to notifications in a pop-up, without having to open or switch applications.

The feature appeared in an Android Nougat Developer Preview and it seems that it was expanded to work without having to unlock the device and input the password, pin or the pattern.

But Google did remove the feature in later Developer Previews, which means that it isn’t present on smartphones running the fifth Developer Preview or the stable version of Android 7.0 Nougat.