ASUS Chromebook: Plans To Launch The Most Affordable Chromebook Ever

Hello everyone, how are you all doing today? I hope you are all having a great weekend so far. My weekend was a bit shaky because we had to move our entire web network of sites(over 100!) to a new dedicated server. The process didn’t go as planned, we had some setbacks but finally, after 72 hours, the transfer is complete so we apologize for those of you who had trouble accessing the web site for the past 3 days or so. Anyway, lets move on to some good news regarding new Chromebooks and such…

ASUS is setting up to launch the “most affordable Chromebook to date”, according to a listing featured in an American educational reseller catalog.

These features come from a Phoenix-based tech company named Troxell’s; Their 2015 brochure for K-12 education, also promotes other popular Chromebooks including the ASUS Transformer Pad. 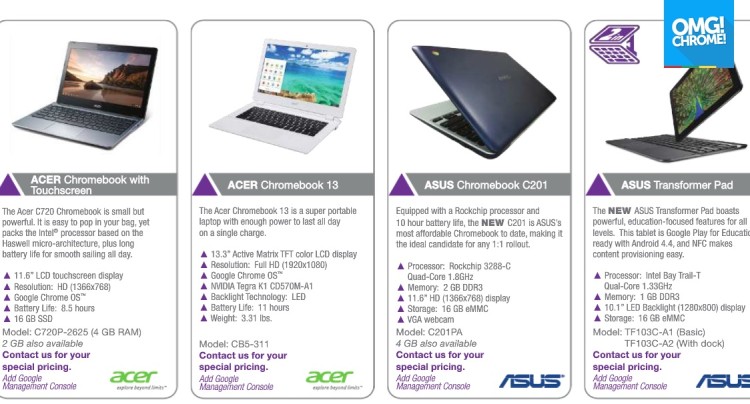 We don’t have any information regarding what kind of ports the ASUS 2015 Chromebook’s will have but, it’s unlikely not to include the usual selection of USB, HDMI and SD Card reader. Perhaps it will go the route of the Chromebook Pixel 2/Macbook and offer the USB Type-C? Lol, you never know.

The ASUS C201 (model number: C201PA) is, like most current Chromebooks, being targeted at education. If you Google the model number, some good info comes up including touch-enabled model offering 4GB RAM and a 32GB SSD.

This is the big selling point, ASUS has yet to reveal the price of their C201 Chromebook’s but we can assume it will probably, rather it SHOULD be less than $250, since it is them that claim this will be the cheapest Chromebook ever. Let’s see if they keep their word or maybe they were just saying it to get publicity? Hmm…