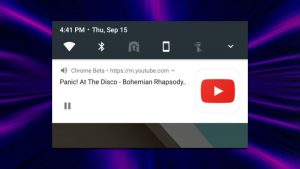 Hello everyone, how are you all doing? I hope you are all having a great week so far. My week has been decent, put it that way. I am thinking of switching my main internet provider because the current one that I use, just isn’t doing the job! As we type their internet is failing to connect, annoying when you look at how much you are paying them every single month, smh! Luckily of course I do have a backup ISP which is what I am using now, it’s much more stable only issue is this company charges by GB(I have a 40gig/month plan), whether as my other ISP, the one that is failing to connect, is unlimited. Lol anyway please read on…

Today we have some interesting news regarding the new development for Chrome Browser 54. Before we go ahead and list the other changes, lets just make one thing clear. This is the MOST important update available for the majority of people who will be updating, myself included.

Complex user interfaces often require a large amount of HTML. Most languages allow developers to create their own components built on top of language primitives to mitigate this kind of verbosity. Custom elements allow developers to create their own custom HTML tags, and define the new element’s API and behavior in JavaScript. This enables a browser-native way to build reusable, interoperable components. Chrome 54 provides support for the latest custom elements V1 spec, which is broadly agreed-upon by major browser vendors. Chrome will also continue to support the V0 API until enough developers have moved to V1.

It is not uncommon for desktop users to have multiple windows or tabs open simultaneously. Some sites utilize this behavior, such as web editors that open documents in their own tabs. Historically, communicating between those tabs has been difficult. BroadcastChannel is a new one-to-many messaging API between windows, tabs, iframes, web workers, and service workers. It allows scripts to establish named channels to send messages between browsing contexts of the same origin.

Media is an increasingly large and important part of the browsing experience on mobile devices that requires fluidly utilizing the entire screen. Developers can now use Element.requestFullScreen() to trigger full screen mode after a screen orientation change in addition to after a user gesture. This allows experiences like rotate-to-fullscreen for media players.

In addition to fullscreen improvements, Chrome on Android now persists the media notification of a backgrounded HTMLVideoElement, allowing a user to continue playing videos while they aren’t visible. Developers can detect background video playback by using the Page Visibility API.