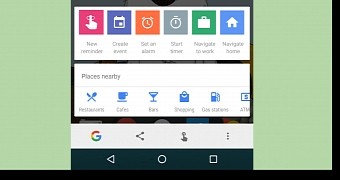 Google’s Now on Tap was introduced last year with the release of Android Marshmallow 6.0, and it has been receiving updates and improvements ever since. At the moment, the company seems to have started testing some new features for it.

Now on Tap makes it easy for users to search for various content online by simply tapping and holding the home button on their phones. When Now on Tap activates, it analyzes the screen of the handset and provides users with suggestions.

At the start of the month, Google announced its intention of bringing new functionality to Now on Tap feature, in order to improve its popularity among users. The Mountain View-based giant introduced an interesting feature that allows users to get information on images in the camera mode.

To add improvements to the feature, Google has started A/B testing some … (read more)
Source link