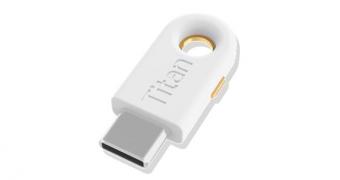 Google is updating its Titan security keys with USB-C connectivity, and the new version will go on sale on October 15 in the United States.

Security keys are becoming increasingly popular, as they serve as one of the most secure ways of protecting accounts, documents, and pretty much any data.

While two-factor authentication comes in handy, adding a second security layer to an account, some are concerned that hackers could eventually be able to break into this and intercept sensitive information, like security codes, that can be then used to access personal data.

Security keys eliminate this risk, as they require a potential attack to actually be in possession of the device to access an account.

Going on sale in the Google Store for $40

Google’s new Titan security keys will be specifically addressed to customers who upgraded to devices with USB-C, and they come with support for Android, Chrome OS, Windows, and macOS.