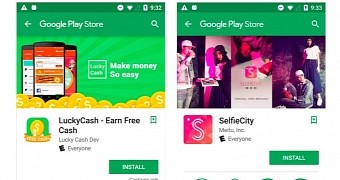 Security company Lookout discovered that no less than 500 Android apps that were published in the Google Play Store integrated an advertising software development kit called Igexin allowing cybercriminals to deploy malware and spy on users.

Lookout explains that these apps, whose names were not revealed, surpassed 100 million downloads in the Google Play Store and were part of very popular categories, like games targeted at teens, weather apps, Internet radio, photo editors, educational, health and fitness, travel, and emoji.

Google has already removed the apps from the Play Store, which means that users are secure at this point, while those who have already installed apps that looks suspicious and which could be infected with the said malware are recommended to scan their devices with dedicated security software.

Not all versions of the SDK compromised