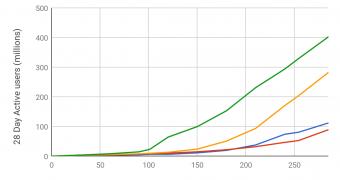 Google no longer shares data as to how many devices run each version of Android, but today the company bragged about the adoption of Android 10 in a more detailed look at how the rollout of this OS version improved.

More specifically, Google says the adoption of Android 10 has been faster than any other Android release, as it managed to reach 100 million devices in just 5 months after launch. What this means is that its adoption is 28 percent faster than the one of Android Pie.

In case you’re wondering how this is possible, Google claims it all comes down to its improvements to ship updates more effectively and a lot faster to Android devices.

The search giant highlights the improvements made in Google Play, including OS system updates.

“In Android 10, we started updating components of the OS directly via Google Play system updates (Project Mainline). Mainline provides security and privacy updates for the OS in a way that’s similar to apps – through Google Play. … (read more)