Google Could Introduce a Customizable Navbar in Nougat 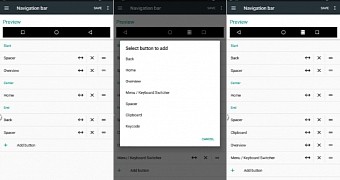 Google released the stable version of Android 7.0 Nougat at the start of the week, but it seems that the company has left some interesting features out, like the Nexus Launcher or Google Assistant. Android Police found that Google is working on a customizable navbar that’s hidden in Nougat.

The new feature could help users customize the navbar in multiple ways. The navbar is hidden in Nougat’s code and a tipster has managed to enable it by modding SystemUI. It seems that all standard buttons on the navbar will be removable and new ones can be added.

Google would provide users with the option to add a clipboard button, a button for assigning keyboard functions, as well as a spacer. Users could also add menu and keyboard switchers if they wished. In addition, there will be icons at the right-hand side of the display, which would allow users to control … (read more)
Source link