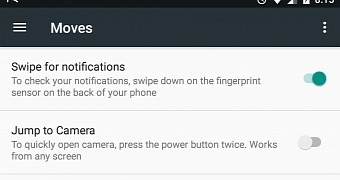 Google started rolling out Android 7.1.2 Nougat beta to Pixel and Nexus devices a few days ago and a Reddit user found an interesting new feature on the build. Apparently, owners of Nexus 5X phones running Android 7.1.2 Nougat can use a new fingerprint gesture feature.

Redditor SpannerPhantom revealed that notifications on Nexus 5X phones running Android 7.1.2 can be opened by swiping down on the fingerprint scanner on the back of the phone. The feature is said to soon arrive to Nexus 6P smartphones as well.