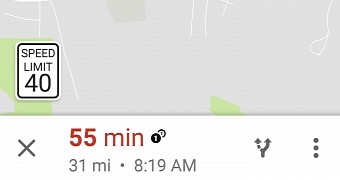 Google pays a lot of attention to its Maps application, considering that it’s one of the most popular Google proprietary apps out there. Now it seems that the application was updated with a new and useful useful, one that shows speed limits during navigation.

A user from Reddit revealed that speed limits during navigation in Google Maps are now visible, thus displaying vital information showing users how fast they should drive in certain areas. The feature isn’t exactly new, as it has been available in other similar applications, like Waze, for some time now.

The feature displays the speed limit of the current area in the bottom left corner of Google Maps, just above the route info. Unlike Waze, users won’t be warned if they exceed the speed limit, but at least now they would know just how fast to drive. It seems that the feature has already started rolling out to … (read more)
Source link