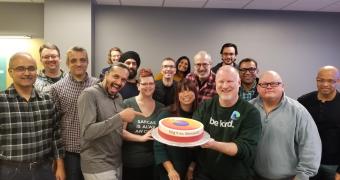 The Google Chrome and Mozilla Firefox dev teams celebrated the release of a new Microsoft Edge browser using a tradition that has been around for many years already: anniversary cakes sent to the company shipping the browser.

For what it’s worth, Joshua Berenhaus, member of the Microsoft Edge dev team, says Mozilla’s cake had a coffee flavor (insert drooling emoticon here) and was probably baked by the guys over at Mike’s Amazing Cakes in Redmond.

While sending cakes to each other is a long-time tradition, Mozilla hasn’t necessarily been excited with Microsoft’s decision to migrate to Chromium.