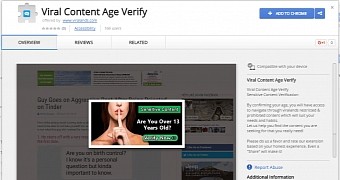 Maxime Kjaer, a 19-year-old Danish student, has uncovered a set of Google Chrome extensions that were hijacking Facebook accounts but were capable of many more malicious actions.

Crooks were distributing these extensions via Facebook posts for all sorts of cheesy and raunchy viral content. Users who clicked on the links inside those Facebook posts landed on a site that asked them to verify their age.

Unlike other sites that allowed users to enter their age in a form, these ones were asking them to install one of many Chrome extensions.

Extensions were hosted on the Google Chrome Web Store

All of these extensions had a similar name, involving the words “viral,” “age,” and “verify,” and were hosted on the Google Chrome Web Store, which helped users dispel any doubts they had about the extension’s legitimacy.

Kjaer, who broke down the code found inside one of these extensions, explains that they all requested intrusive permissions, such as the abil… (read more)
Source link