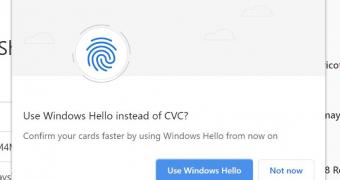 Google has recently updated Google Chrome browser with support for Windows Hello for payments, which means that you can now use face unlocking to access cards that are stored in the app.

Google Pay is offered at browser level in Google Chrome, and if any cards are added, you can easily autofill all the information when trying to make a payment.

More recently, however, the search giant rolled out a new feature specifically aimed at Windows 10 users which enables them to use Windows Hello instead of CVC when making a payment. In other words, Microsoft’s biometric authentication system is now used for confirming cards, as long as the feature exists on the device that’s being used to make the payment.

While Google hasn’t announced the feature just yet, Owen Williams says on Twitter that it’s already available in the beta build of Chrome and should make its way to the stable version of the browser rather s… (read more)