Here’s How Much Microsoft Contributed to the Development of Chromium 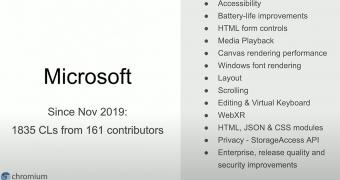 Microsoft has become one of the biggest contributors to the Chromium engine after embracing it for the modern version of Microsoft Edge, so naturally, the Redmond-based software giant has helped improve it quite a lot lately.

The company joined the Chromium project in November 2019 when the very first contribution has been made, and since then, it has continuously helped make browsers running on this engine much better.

And as we know already, there are already plenty of Chromium browsers out there, as Microsoft Edge isn’t the only one using it, obviously. Google Chrome is the most famous of them all, and right now, it’s also the world’s number one browser with a market share that’s close to 70 percent. In other words, nearly 7 in 10 PCs out there run Google Chrome, despite coming with another default browser.

Other Chromium browsers include Microsoft Edge, Vivaldi, and Opera.

Statistics shared on Twitter by <a href="ht… (read more)