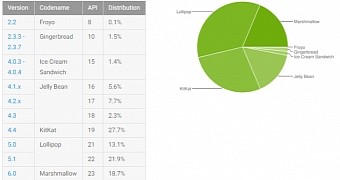 Google has just released the Android Distribution Chart for September and we have to say that it’s rather late, considering that it’ almost the middle of the month and usually the numbers are released during the first days of the month. The chart doesn’t come with any surprises.

Google has just released September’s distribution numbers and we must say that they’re rather predictable. Marshmallow 6.0 continues to grow and now reaches 18.7%, up 3.5% from last month’s 15.2%.

The number isn’t surprising, considering that many smartphones have been updated to this Android version in the past month. Lollipop 5.0 and 5.1 reached 35%, down 0.5% from 35.5% in August. Lollipop 5.0 actually lost a full point, from last month’s 14.1%, while Lollipop 5…. (read more)
Source link