Microsoft Crowned the Most Admired Software Company in the World 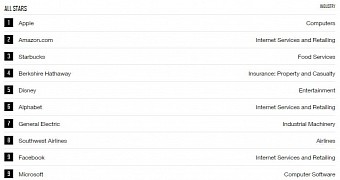 Fortune has published the list of the world’s most admired companies, putting Apple in the first position when it comes to all industry sectors, and Microsoft on the leading spot of the software business.

Fortune’s research involves 3,800 executives, analysts, directors, and experts who expressed their votes on the world’s most admired companies from a wide variety of industries. Apple is the leading brand in the charts, followed by Amazon, Starbucks, Berkshire Hathaway, Disney, and Alphabet (the group that owns Google).

Microsoft is on the 9th position in this chart, just after Facebook, and this represents an important increase from the 17th place last year.

But as far as computer software is concerned, Microsoft remains the world’s most admired software company, after previously being ranked the second in 2016.