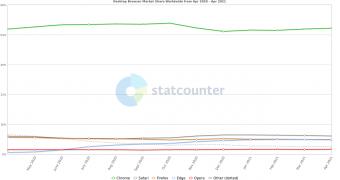 In theory, the transition that Microsoft Edge made from EdgeHTML to Chromium turned the default Windows 10 browser, now available cross-platform, into a more powerful rival to Google Chrome and Firefox.

But in practice, Google Chrome is by far the world’s leading desktop browser, and what’s more, it was the only one that managed to improve its market share last month.

According to third-party market share data published by StatCounter for the month of April 2021, Google Chrome controlled 67.55 percent of the desktop browser market, up from 67.14 percent in March. It’s a small increase, but on the other hand, Chrome is the only big browser that didn’t record a drop in April.

Edge still the third top browser on the desktop

Safari, for example, which is only available on macOS, declined from 10.11% in March to 9.85% in April, though it continued to be the second most pop… (read more)