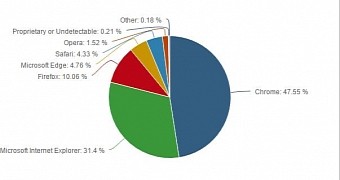 Microsoft launched Edge browser with much fanfare in mid-2015 when the company introduced Windows 10, and it continued praising it this summer when it launched the Anniversary Update, which brought several improvements such as support for extensions.

Overall, 2016 was a pretty big year for Microsoft Edge, as it evolved to eventually become a mature browser that can be used as a replacement to Google Chrome and Mozilla Firefox, coming with a rich feature set and substantially improved stability and reliability.

But this doesn’t mean that Edge actually managed to become a very popular alternative to its more famous rivals, as statistics provided by NetMarketShare show.

In fact, Microsoft Edge really had a hard time keeping up with its competitors, and the browser barely reached 4.76 percent market share for the year.

Google Chrome leads 2016 statistics with a share of no less than 47.55 percent, which means that nearly one … (read more)
Source link