Microsoft, Google, and Samsung Among the “Most Admired Companies” in Canada 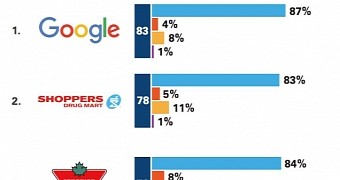 The 2018 Corporate Reputation Study reveals that this year Google is the most admired company in Canada, ahead not only of local brands but also of all of its rivals in the tech industry.

The survey, which was conducted by Leger and included a total of 241 companies from 28 different sectors, shows that 87 percent of the respondents have a good opinion on Google, and only 4 percent of them said they’re not impressed with the search giant.

Shoppers and Canadian Tire come second and third, respectively, while Sony is fourth with a 76 percent score. Samsung lands fifth with 75 percent, while Microsoft is very close on the sixth place with 74 percent.

In case you’re looking for Apple, the Cupertino-based tech giant is only ranked 48th, way behind all of its competitors in the tech … (read more)
Source link