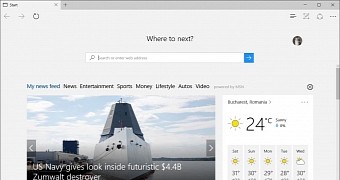 The Windows 10 Anniversary Update brought support for extensions in Microsoft Edge browser, but this was just one of the many improvements that the company is planning for the Internet Explorer successor, and today, it has just provided us with a glimpse into a new feature that’s already being worked on.

Microsoft has confirmed that it started working on WebVR support for Edge browser, a feature that will allow virtual reality content to be played right into the application.

Virtual reality is the next revolutionary thing in the tech field, and Microsoft is one of the companies that are investing to be a pioneer of new technologies, so it makes sense to see the Edge team already working on introducing WebVR support.

“Today, we’re excited to announce that we’ve begun development on experimental WebVR support in Microsoft Edge! WebVR is the next frontier in web graphics, enabling developers to create a wide range of truly immersive experiences for a variety of devic… (read more)
Source link