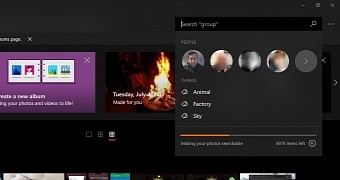 Microsoft is working on another major update for the Photos app, and it looks like the company is already experimenting with a bunch of new features that are more or less inspired from Apple’s and Google’s products.

A report from WindowsCentral reveals that Microsoft is currently testing a smart search feature that relies on artificial intelligence to identify people and objects showing up in the photos, thus automatically creating groups that filter photos by faces, months, colors, and things.

Features like these have already been implemented in photo apps on rival platforms, including Apple’s and Google’s, and Microsoft is clearly trying to bring its own solution in line with what others are offering.

The Windows 10 Photos app is at this point well behind alternative solutions, and although it slowly evolves from … (read more)