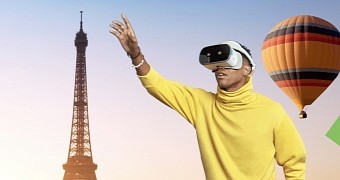 Featuring no cables or anything that would keep you from exploring the infinite virtual reality world, the Mirage Solo is now available for purchase as world’s first standalone VR headset powered by Daydream, a virtual reality platform developed by Google and built into the Linux-based Android mobile operating system.

“Break free from reality and the limitations of old VR. Watch that game-winning shot–as if you’re right there in the front row. Live-stream your wedding in 3D–so everyone can be part of it. The next generation VR headset has arrived,” said Lenovo. “Introducing Mirage Solo, the world’s first stand-alone Daydream headset, and the Mirage Camera.”

The Lenovo Mirage Solo is the VR headset you’ve always wanted, and it comes accompanied by Mirage Camera, a light and compact camera d… (read more)