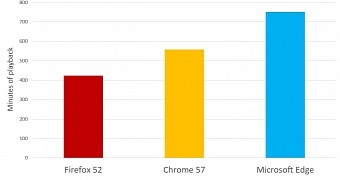 The Windows 10 Creators Update is here with lots of improvements, and Microsoft used the arrival of the new OS version as an occasion to show that its Edge browser is so much better than rivals Google Chrome and Mozilla Firefox in a number of aspects, including battery life.

A research that the company performed on Windows 10 Creators Update shows that Microsoft Edge can last 77 longer than Firefox and 35 percent longer than Google Chrome when it comes to streaming a video from Vimeo in full screen.

To determine which browser provides longer battery life than the others, Microsoft configured display brightness to 75 percent, volume was set to mute, while locati… (read more)
Source link