Hello everyone, you can now download Eternium for Chromebook and play a very popular offline RPG that works smoothly. This game has sort of gone under the radar, maybe because of it’s niche? Either way, I am glad I found it so that you can also try it and as I have already noted in the past, Chromebooks released in 2017 or newer can now run most Android apps and Android games! We now have a list of Chromebooks that support Android apps where you can double check to see if your Chromebook can run Android apps, even if you don’t find your Chromebook on that list, as long as it was released in 2017 or later, it most likely can run Android apps from the Google play store.

Today we will highlight some reasons why we think you should go ahead and give Eternium a try on your Chrome OS devices. This game like said, is very underrated but man was I glad that I decided to try it. It comes with very nice graphics, an even better storyline and the controls honestly make you forget that this game is being played on a touchscreen device. Eternium also brings back that natural classic RPG feel that some of us might have tried way back in the early 2000s. The game allows you to wonder around to find multiple ways to defeat enemies and travel. But what really makes this game great is that it is practically made for offline gaming which is a suppressed niche yet we actually have way more people that play offline games, than online games. Let us know what you think about this game once you decide to try it by leaving a comment below.

What Is Eternium Game About?

Eternium is an amazingly fun and beautifully crafted Action RPG, reminiscent of the great classics. Eternium stands out from other mobile Action RPGs by its effortless “tap to move” and innovative “swipe to cast” controls, and its player-friendly “no paywalls, never pay to win” philosophy. With the exception of a couple of online-only features, the game can also be played offline after the content download completes. Drawing signs to cast spells is easy and rewarding. The tap-to-move control is more natural and relaxing than thumbsticks, and it’s also truer to the vintage point-and-click Action RPG experience.

Purchases are completely optional. Gems, the game’s main currency, can be collected from enemies and quests. There is no limiting stamina or energy. The best things in the game are obtained by playing, not paying.

Venture into dark caves and dungeons, explore forests, villages and graveyards, lay siege to demon controlled castles, brave snowy mountain peaks, travel to the moon to slay strange creatures among craters and canyons, and beyond, to the deserts, pyramids and jungles of the red planet. 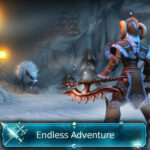 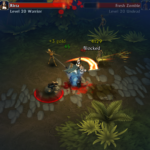 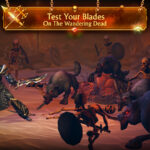 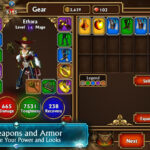