Hello everyone, you can now download ScratchJr for Chromebook and experience a very well rated and popular coding app that is targeted at children who are 8 years or younger.

Today we will highlight some reasons why we think you should go ahead and install ScratchJr app on your Chrome OS device so that you can try this educational app that does include education games and activities that are fit for children. If you are a teacher or parent, this app is something you might really find helpful especially during this current pandemic. With that said, I have used this app for about 2 weeks here and there, my children are a bit too young(1 and 2 year olds) but for people like me who also want to learn how to program or code, this is actually a pretty neat app, again, it’s tailored towards children but I have personally discovered that these so called children games are some of the best methods to learn how to do anything. They usually move at a pace that almost anyone can follow and thus they take the pressure off, I love them and I recommend this app to anyone who has been curious about learning how to code/program.  Let us know in the comments what you think about this app if you decide to try it for you and your children.

What is ScratchJr about?

ScratchJr was inspired by the popular Scratch programming language, used by millions of young people (ages 8 and up) around the world. In creating ScratchJr, we redesigned the interface and programming language to make them developmentally appropriate for younger children, carefully designing features to match young children’s cognitive, personal, social, and emotional development.

As young children code with ScratchJr, they learn how to create and express themselves with the computer, not just to interact with it. In the process, children learn to solve problems and design projects, and they develop sequencing skills that are foundational for later academic success. They also use math and language in a meaningful and motivating context, supporting the development of early-childhood numeracy and literacy. With ScratchJr, children aren’t just learning to code, they are coding to learn. 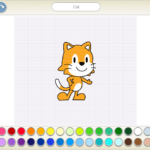 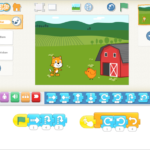 You can check out another education app known as ABCMouse.