Today we will highlight an awesome game that has already been downloaded well over 8 million times according to the official Android game store statistics and it isn’t slowing down anytime soon. Temple Run 2 was developed by Imangi Studios, a company that makes family friendly games with the same unique graphic style that you will notice across all their games released on mobile devices. You can end up playing this game for hours without even realizing it, it’s very addicted and at the same time fun.

What Is Temple Run 2 About?

Temple Run 2 features the same controls as its predecessor. However, the gameplay itself is slightly different insofar as it introduces new obstacles, such as zip-lines, mine tracks, sharper turns, waterfalls, and jets of fire. The game also features new power-ups, whose use is typically governed by an energy bar that is filled up by collecting coins, and players now have the ability to save the protagonist from death by using green gems that are collected while running, or purchased online. The game is set in a different location than the first game, and the main character runs faster. The three monkeys that chased the character in the original game have been eliminated. Now, a singular enlarged monkey called Cuchank is the sole antagonist

Navigate perilous cliffs, zip lines, mines and forests as you try to escape with the cursed idol. How far can you run!? 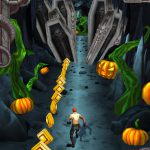 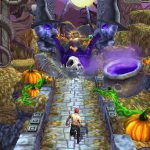 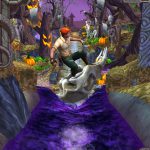 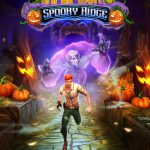